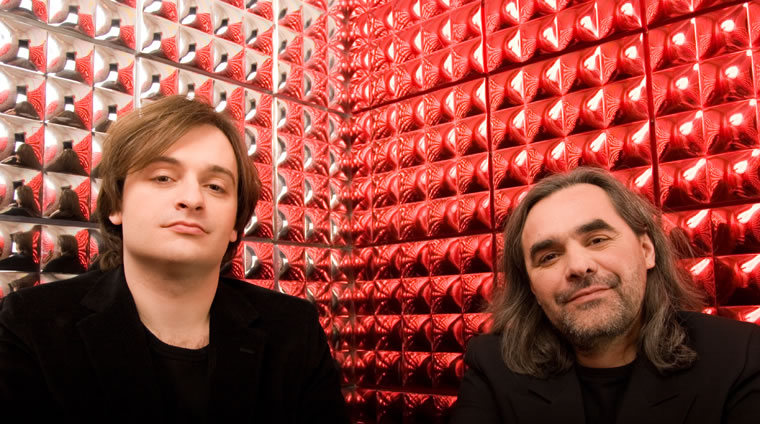 MGI was created in 1995 by Moscow musicians Arkady Martinenko of Megapolis, Heat of the Earth and the Eject Project, and Boris Nazarov. Together with the „Ministry of Psycho” project, MGI played a number of live electronic concerts for the independent experimental radio station „Substation”. These concerts paved the way for the project’s first studio album, Surround Wednesday, released by independent label Citadel Records in 1997.

The band’s third member, Sergei Belyaev joined in late 1998. He participated in the recording of MGI’s second album, Pizza. The musical style of this album was funk with elements of drum-n-base and ethnic trip hop. The Moscow Grooves Institute also invited Sergei Klevensky and the members of the Detsky Panadol project to take part in the recording of the album.

In 2000, MGI released a new album, Commercial and also filmed four videos for the compositions “Stereophonique”, “Voyage”, “2 professors”, and “Dancing”. Later videos included “Les Chrysanthemes” (2001) and “Na Zare” (2003). The videos have been shown on MTV Russia, Muz-TV, Music Box, A One, and O2TV as well as on Ukrainian and Belorussian musical channels. In 2001, MGI joined with the Mummy Troll» to record a version of Victor Zoy’s song “Malysh”, which remained at number one on Radio Maximum’s music chart for several months.

The project’s fifth studio album, Les Etoiles Sont Plus Proches Avec Les Yeux Fermes was released in April 2006, although it had been in preparation since 2003. Olga Noel contributed to the backing vocals on this album, along with MC Chevy of German rap band N.O.H.A., and Daria Rodcher.

Arkady Martinenko and Boris Nazarov wrote the musical scores to the films Native and IDtimate (2007) and Dance, Don’t Stop (2007), directed by E. Lavrentiev. They have worked on the remixes of compositions by t.A.T.u., Vitas, Mummy Troll, Enrique Iglesias, and Alsou, and have composed music for TV advertisements.

In 2007, Citadel Records released a multi-color version of the Moscow Grooves Institute’s debut album Surround Wednesday, partly rearranged by sound producer Sofia Kruglikova. In 2009 a performance by Moscow Grooves Institute and Olga Noel opened the concert program of the forty third MIDEM. They are currently working on a sixth studio album.